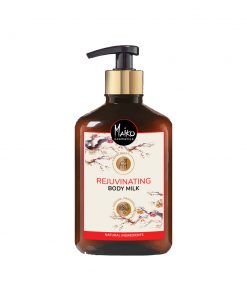 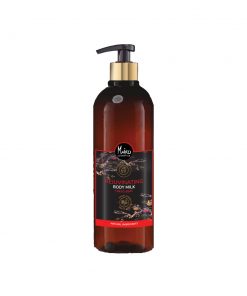 480 ml
This body milk consists of a high percentage of camel milk and is rich in vitamins C+E. It is absorbed easily and supplies the skin with the necessary vitamins and minerals our body needs, leaving it smooth, healthy and firm.

Body lotion based on camel milk, shea butter and a mixture of essential oils.

Camel milk is known for its many healing properties, it contains alpha hydroxy fatty acids (AHAs) which have the ability to penetrate into the deep layers of the skin.

Vitamins, A, B1, B12, B2 and Keratin gives a variety of solutions to make the skin more healthy, vital with smoother apperience.

Almond oil is known in ancient Chinese medicine as scar treatment, contains retinol and helps in the formation of new cells, rich in vitamin E, omega 3 which protect against UV rays and reduce skin aging.

Lavender and Jasmine oil, very popular oils in ancient Japanese culture and among traditional geishas thanks to their wonderful aroma and many healing properties.

Contains Beeswax that produces a protective layer for the skin and prevents moisture loss.

The Scent of this lush body cream is a combination of a delicate and soothing aroma of White Tea, the refreshing Geranium and the sensual Passionflower makes an unforgettable aroma!

One that cannot be ignored and on the other hand is not strong or oppressive. Beyond its wonderful aroma, Geranium Oil is known for its properties for healing mental states and improving mood.

In recent years aromatherapy has entered the mainstream and a lot of medical research is being done to explore the ancient knowledge. One study found that high concentrations of citronol in geranium oil, prevented the formation of nitric oxide (the airborne infection we breathe) and prevented inflammation and death of brain cells. According to the researchers, geranium oil can benefit people suffering from neurological and neurological diseases. Stress, anxiety and depression A randomized clinical trial, conducted on women undergoing childbirth for the first time, found that inhaling geranium oil significantly reduced anxiety. Additional evidence suggests that geranium oil is soothing, uplifting and relieves a depressive mood. Menopause-Menopause An experiment conducted on women at menopause revealed that geranium oil encourages the production and secretion of estrogen. The researchers described that geranium oil can help women who suffer from symptoms caused by low estrogen levels and minimize disorders and health effects caused as a result of menopause.

Please leave your details and we will contact you shortly